Fred Negro has been creating art since he was in primary school with his first cartoon called The Man with no Head. In 1979 Fred started his professional career as a graphic artist and cartoonist, doing artwork for the band handbills under the title Living Dead Grafix.

In 2016 Fred put together his first solo art exhibition at  gallery in St Kilda. ‘St Kilda’s Alright’ was a showcase of Fred’s original artwork including acrylic paintings, drawings, special pub strips and other illustrations.

In 2017 Fred had a major exhibition at St Kilda gallery BRIGHTSPACE titled St Kilda’s Alright - The Fred Negro Experience. The exhibition and surrounding events were a showcase of Fred’s original artwork including acrylic paintings, drawings, pub strips, music history and more. Both exhibitions were hugely successful and helped to establish Fred as a legitimate visual artist and painter and not be seen as merely a cartoonist or illustrator.

Over the years Fred has painted several murals at St Kilda venues including The Espy, Prince of Wales Hotel, Pint on Punt, Lost on Barkly and Surabuya Johnny’s. Fred has also created artwork and illustrations for books, newspaper and magazine publications, wine labels, festivals and exhibitions.

Fred continues to have pop up exhibitions at venues in St Kilda as well as sell his artwok online. 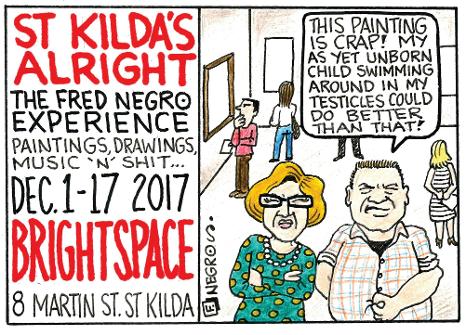 Mural painted in 2000 by Fred Negro and Steve Prictor, Espy lounge bar, consisting of St Kilda locals and is based on a famous photo of the Espy back in the 1890s - Photo by Peter Monagle
© Copyright Fred Negro